In Exploriana YOU decide the fate of a team of brave explorers!

Setting off into farflung corners of the globe, the explorers throw themselves deep into the unknown, each time hoping to discover new contributions to science and history!

• Resource management (money is the major resource in the game)
• Variable turn order (getting to play first can be a major advantage)
• Push your luck (the core mechanic, drawing cards to make discoveries and avoiding hazards)
• Hand management (the players get to choose various explorer cards with special abilities that they can use during the game)
• Set collecting (with the many card combinations available collecting certain cards could deliver more points)
• Worker placement (where to send your explorers is a crucial decision)

Exploriana is simple to set up. Each player is given some starting funds, two mission cards, to try and complete during the course of the game, and a guide token to help them on their way.

Exploriana is played over a variable number of rounds, further split into 4 phases.

Each round a number of explorers are laid out. Each explorer has their own special ability and each player gets to pick one to add to their team.

Experienced players may choose to use the alternate recruitment rule that eliminates the need for the recruit explorers phase. The players start the game by drafting a full team of explorers to use throughout the game.

There are three regions to explore in Exploriana: South America, Africa and the Far East, each of the regions is more dangerous than the last.

The players now decide which of the three regions they will send their explorers too.

In renown order, players take turns placing one of their explorers until every player has placed two explorers.

Each of the three region decks has its own unique deck of cards and the decks are packed with fabulously illustrated discoveries.

Every card has a unique piece of art showing what type of discovery can be found.

A region is explored by revealing cards one at a time, simulating an expedition pushing ever deeper into the wilderness.

If a player should reveal any three hazards of the same type, or all three different hazards while exploring, then the expedition is lost and the cards are shuffled back into the region deck to be found in future expeditions.

Revealing up to four discovery cards allows a player to make a single pick.

A pick is taking a set of animals or a single treasure, orchid, map or location card.

If they are brave or lucky enough to have revealed five discoveries without becoming lost, they may make one extra pick!

At the end of each round the players check to see if any deck is empty, and replace any region deck that is with its respective reserve, which will then trigger the final round of the game.

The aim of the game in Exploriana is to accumulate the most victory points.

The discoveries the players make award renown, wealth or victory points, and some even give the player a combination of awards! 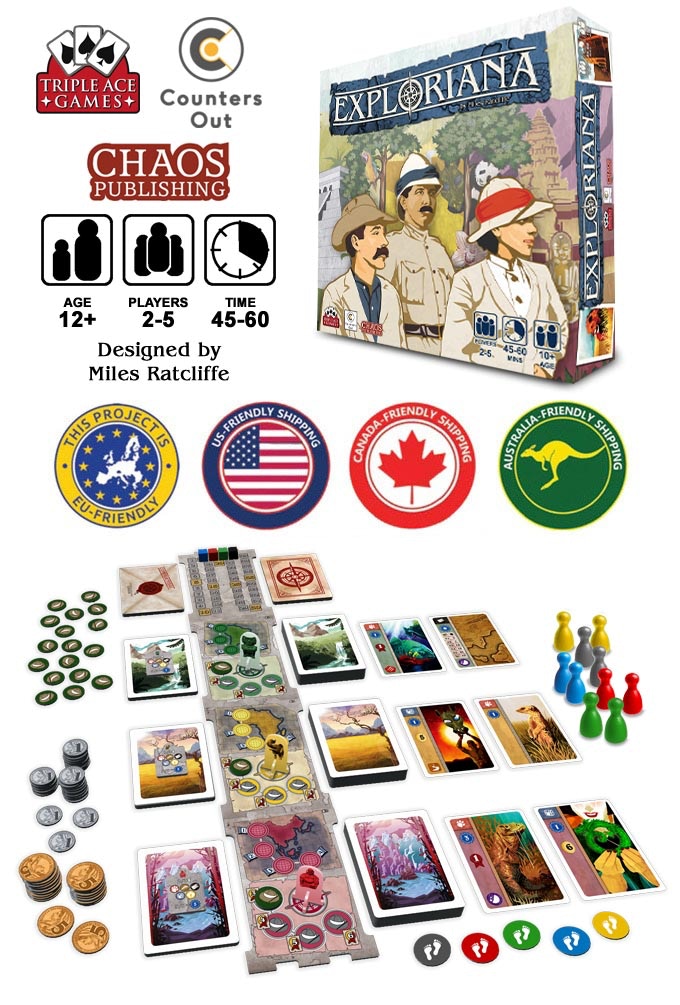 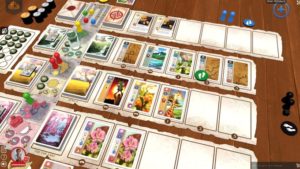